Hi all members we have just completed our mid week Snapper comp GDAC/POLICE at StKilda .WE looked like having good boating conditions with south winds of less than 10knots.But when we started off we had winds of south west of
17 knots, So due to the wind we lost a number of members to both clubs, due to their small boats but by 6.30 the wind backed off to s/e to 12 knots which made fishing & moving about better.
Fishing our end of the bay is a little hard to around Currum Frankston area ,GDAC had 21members fishing for us ,Police had 16 members .

GDAC only weighed in 17 fish for our club comp .

GDAC won the inter club by about 1.5 kg.thanks to

Graham Burdon with a top fish of 7.66 kg, Howard Bluey Gault one of 5.02 kg John Dafilis one of 4.4kg
Thanks to three anglers that won the inter club comp for us. Thanks to
one of our new members Bill Wainwright for taken Bluey. 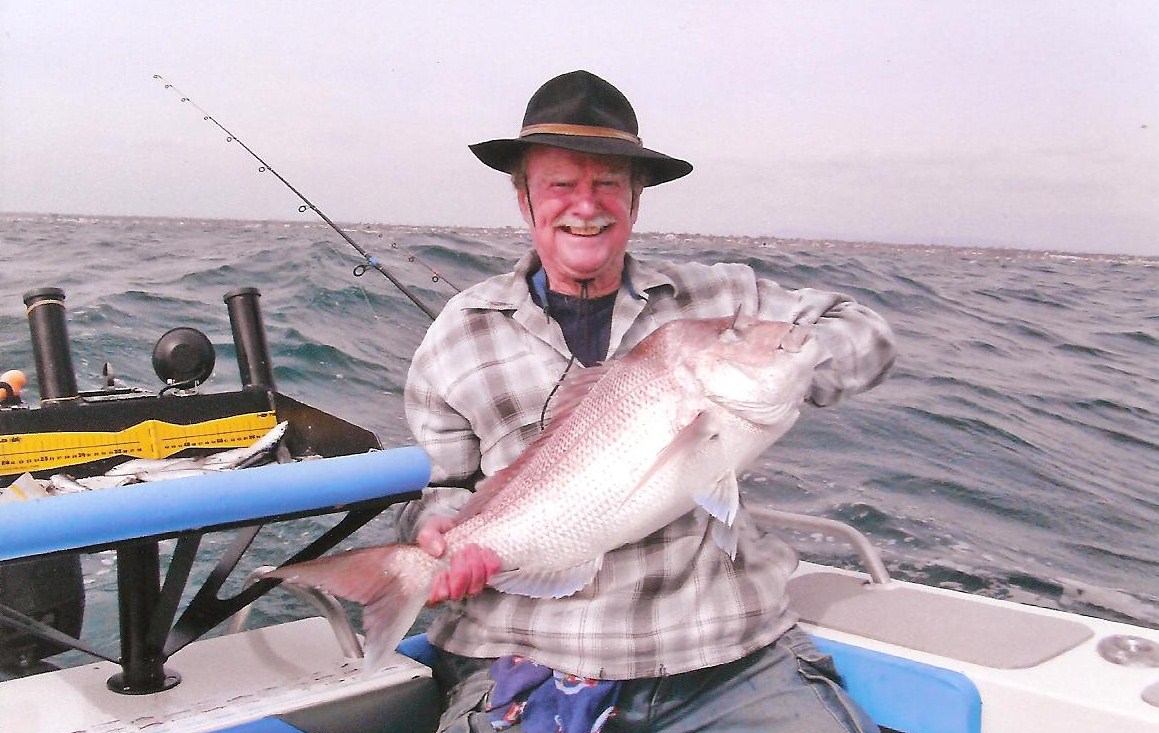 Ten members fished our annual Cup Weekend trip to Jindabyne for some of the biggest and best Trout we've ever pulled out of there. Some arrived a couple of days early and had a chance to look around with Denis and Bob finding finding a hot spot where Bob managed a 2.34kg Brown which has been entered as heaviest trout out of competition.
On the Saturday, they continued this run with Bob in particular in great form for four fish @ 5.5kg and Denis two @ 2.83kg, others also did well and the days total was 17 fish for 14.32kg.
Sunday was Alan's turn as he and Mark got onto a hot spot which was shared with Con and Brian. Alan cleaned up with five @5.7 kg, Mark also did extremely well but chose to return all his catch and did not weigh in. Incidentally, this was his first trip to Jindy in 22 years as a member. Sundays total was 12 for 12.98 kg and the competition was wide open with several chances.
Monday was a tough day with extremely gusty winds spoiling the fishing, however 11 were still weighed in for 8.26 kg giving a total competition weigh of 40 fish ( 30 Browns,8 Rainbows and 2 Salmon) for 33.55 kg -- average .838 kg per fish.Keep in mind that these weights are Gilled and Gutted figures so you can see the fishing was exceptional. There were seven over the kilo with several just under 2 kg, Denis weighed one @ 2kg.
Final placings were 1st Alan Moore 10 @ 8.07kg
2nd Bob Brown 6 @ 7.40 kg
3rd Denis Rowlands 6 @ 6.27kg
Denis and Bob accounted for 12 @ 13.67kg in "Advance", they have both attended the Jindy comp for many years and Bob described it as the most exciting trout fishing he could remember- and he fishes Tassie every year!
The evenings activities were the usual mix of banter,bulsh and beer with a few Reds thrown in and the social aspect of this trip was a highlight as always.
See you next year. 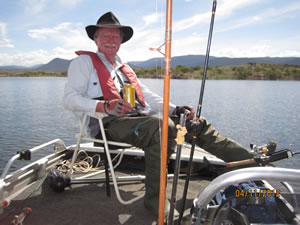 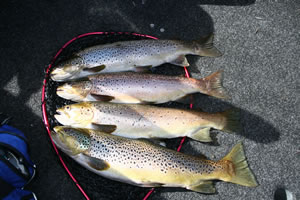 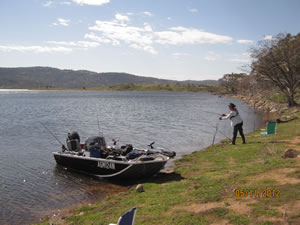 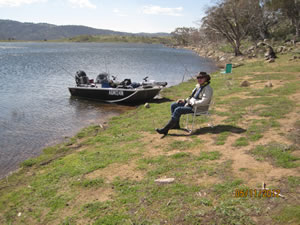 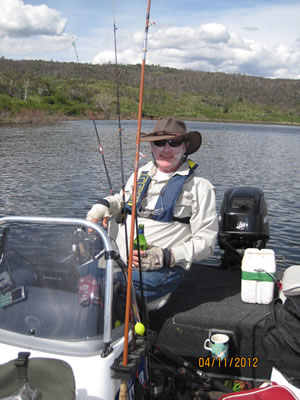 Last Sunday 04/11/2012 we had a Snapper Comp launching from Carrum from 4:30am and weigh in was at 11:30am with your biggest bag of legal size Snapper accordingly to club rules ( 3 over and 7 under ).
.
We had a total of 8 Members participate with Guests.
Every Man and his Dog were out last Sunday on the Hunt for any Snapper left over's from last week's Tea-Tree comp, and there were quite a few out there.

The Snapper were going very hot in some areas down near Mornington , Seaford & Carrum and again you just had to be on the right spot at the right time with Fish being caught from close in and out deep later in the morning. 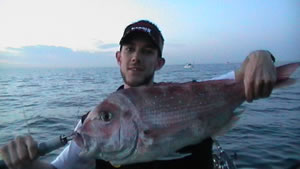 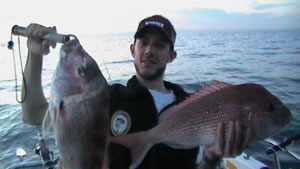 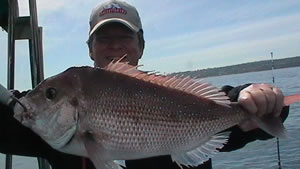 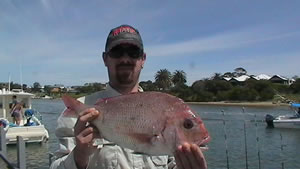 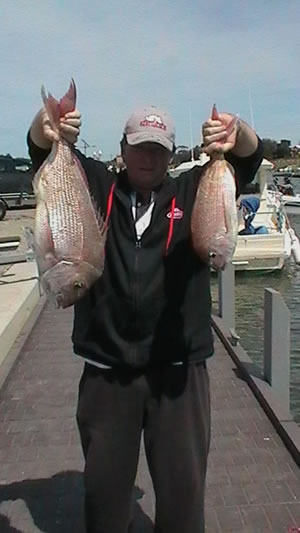 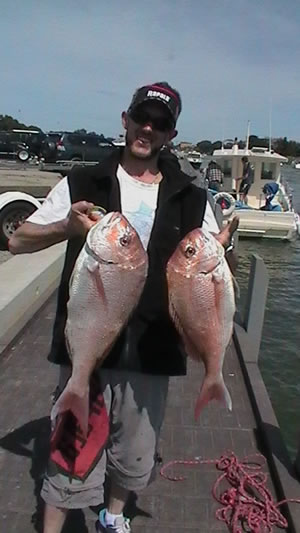 On Sunday 28/10/2012 we had a open Competition launching from St Kilda from 4:30am and weigh in was at 1pm with your biggest bag of legal size fish accordingly to club rules.
.
We had a total of 7 Members participate after it was slow to get off the ground. Surprisingly not many fish were caught on the day considering the conditions were perfect with less than 5knots most of the morning & the bay was loaded with boats from all ends of the bay on the Hunt for those Snapper .

The Snapper were going hot in some areas but I guess you just had to be on the right spot at the right time with Fish being caught from close in and out deep. 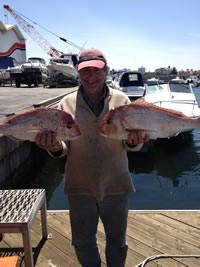 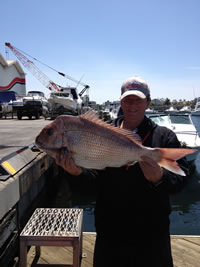 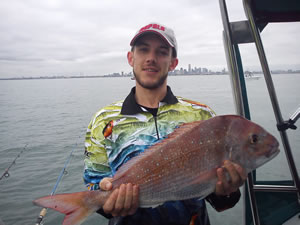 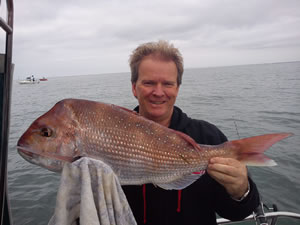 Ten members fished the weekend of 13/14 October at Bonnie Doon, staying at the caravan park. This is the second time we have stayed there and it's a great place, situated at the waters edge with launching possible right in the park.
Weather was kind, Saturday good early and deteriorated but not too bad, Sunday was glorious.
Some good fish were landed, a total of 32 Trout and 5 Golden Perch with all up weight of ?
Trevor kicked off on Saturday with an absolute cracker Golden Perch of 5.55kg (12.5lbs in the old), this may well be a Club record.Tim also went well on the Yellers with 3 yellas weighing in at 3.6kg and the rest of us weighed some reasonable Trout.
Trevor entered Sunday with a lead of about 3.5 kg but Tim came to the party early with a Yeller of 2.62kg so it was on. Trev didn't add much and final results were
1st Tim Plummer 8.200 kg
2nd Trevor Lewis 6.08 kg
3thd Wayne Bradbury 4.570 kg
Another couple of highlights were Trev's sister Kathy with her first trout and Rob MacGibbon who experienced his first ever trolling session with Johnny Whitfield and was successful with three trout.
A good meal and a few beers at the Pub on Saturday night contributed to an excellent weekend. 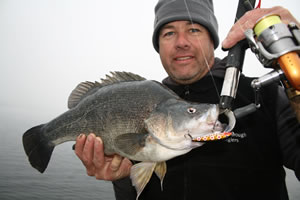 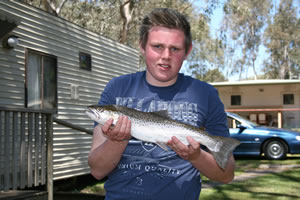 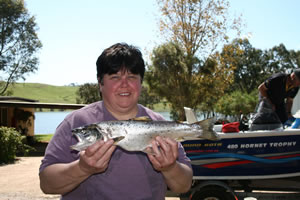 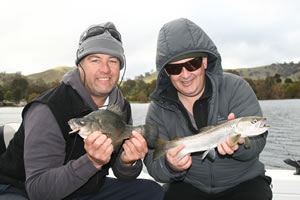 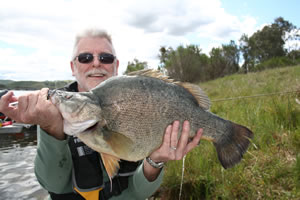 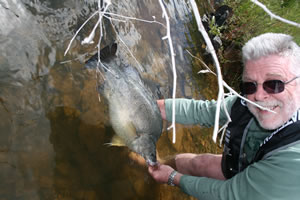 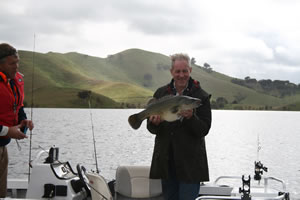 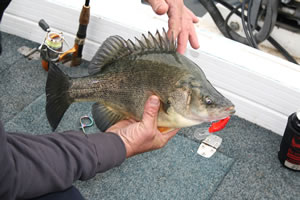 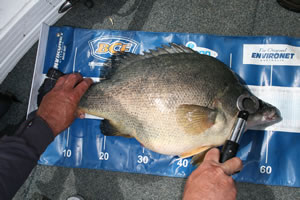 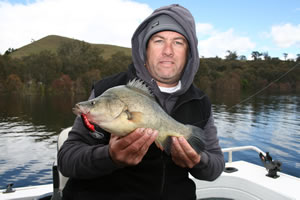 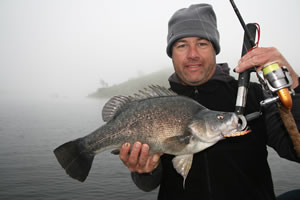 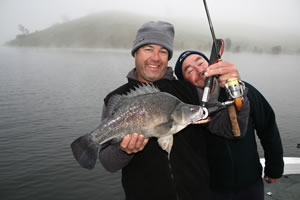 7 GDAC members ventured up to Khancoban over the weekend of 18/19th August. The early birds were hoping to get into some fish on the Friday but woke to rain, rain and more rain! Finally the clouds broke and we were on the water by 11.30am with fish being caught virtually straight away by trolling. Weather turned bad again with only the die hards (fools) braving the elements but being rewarded with some nice fish.

Over the weekend most fish were caught trolling but a few taken on mudeyes and worm. As this trip is a "Measure" competition, most fish caught were returned to the water.

Yesterday 29/7/12 we had a Bream Competition launching from Carrum down the Patterson Lakes, the minimum size was 28cm and you could keep your 5 best fish and Heaviest bag won.
.
We had a total of 7 Members participate some in boats and some land based. Unfortunately not many fish were caught on the day and it was very hard going as only a few Bream were caught ( best on baits prawn/worm ) and the Weather was cold and rainy with the water brown in colour.


No other Member weighed in a sized fish but a big thanks to Tommy, Ron, Chris, Luke, Ethan, Wayne & Michael for all taking part in the comp.

Thanks Chris O'Connell for the report below:

Yesterdays comp went ahead as advised although it was disappointing to see so many members cancel at the last minute as the weather was great all day with waves less than 10Knots .
Never the less we had a great day on the King George Whiting catching 55 whiting between us 5 Members and the competition was very close.

With most fish caught on Squid, pipi and Pilchard fillet on the run out tide just out from St Leonards, and the fish were heavily spawning so won't be round for too much longer in that area but are in Big numbers still. 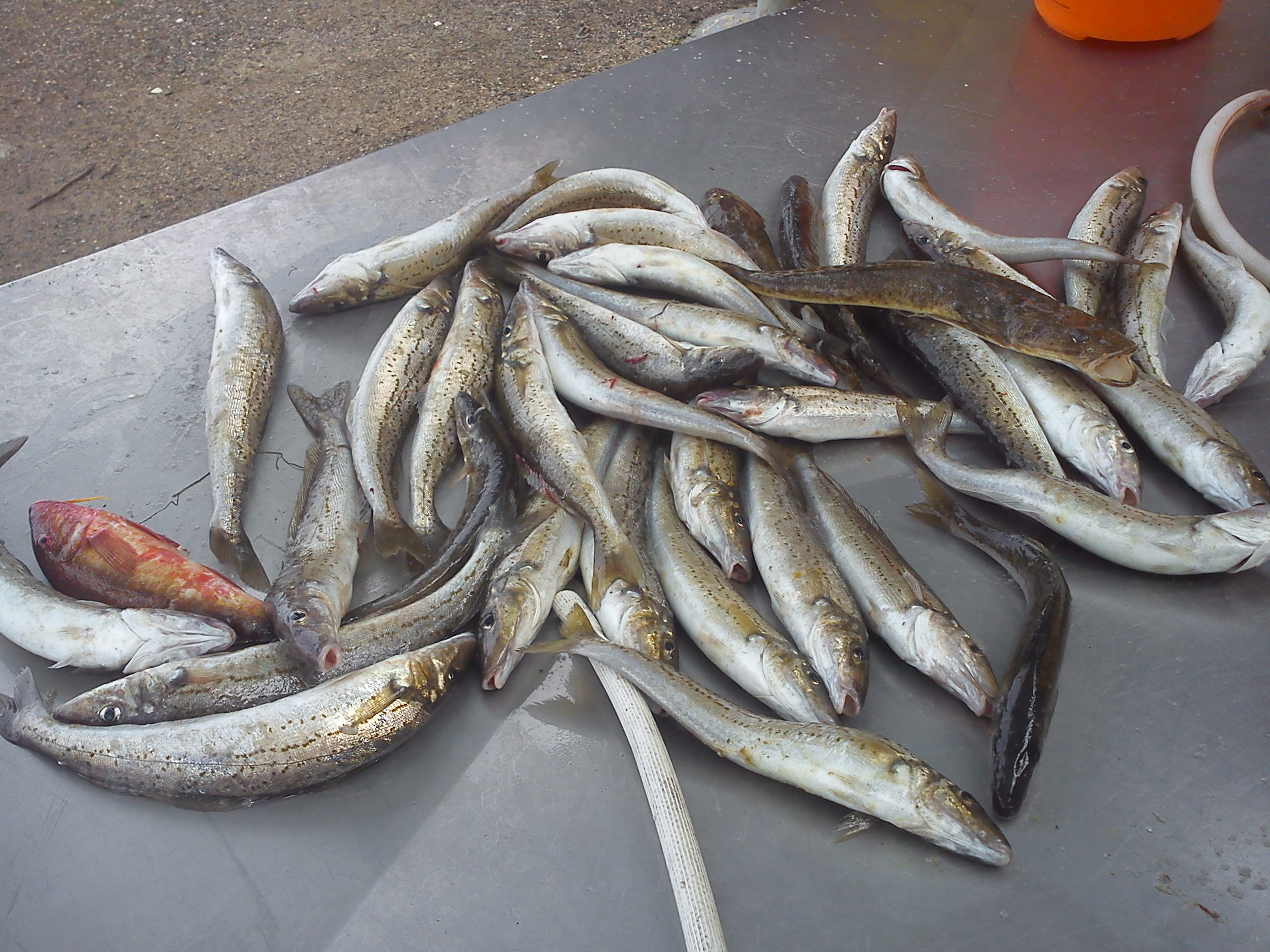 The club fished in the Maribrynong Masters that Essendon Angling club runs. The fishing was tough with Greensborough only weighing in 5 bream with the 9 anglers that attended. Greensborough came second overall at the end of the comp. For Greensborough placings were 1/ Karl Ravenello (0.459kg) 2/ Chris O'Connell (0.421kg) 3/ Ron Mallett (0.414kg) Great effort by the guys in tough conditions.