Greensborough angling club fished Jindabyne over the Melbourne cup weekend with plenty of fish caught and released. We had 11 members and 1 visitor. 13 browns and 25 rainbows caught with the heaviest going 1.71 kg cleaned. A great time was had by all.

Greensborough club also fished Port Phillip Bay from StKilda against Police angling club and most members caught their bag of fish within 3 hrs. Members also hired a charter boat for those without a boat to fish the comp and they all done very well.

Member Allan Moore fished Bemm River 2 weeks ago and landed Bream, perch, trevally on hard body lures and soft plastics. The entrace is closed but the fishing is excellent.

Greensborough Angling Club has had several guest speakers over the last 4 meeting with names like Mathew Hunt, Lee Rainer, Charlie Micaleff and Neil todesco. These guys were fantastic in their teaching of techniques to the members and guests. We will be having other guest speakers next year so keep your eyes on the website for details.

The club had a trip to Khancoban with 17 members attending from the Friday to the Monday with people coming and going during that time. Most members measured in fish with the biggest going 58cm caught by Mark Hall on a lure casting amongst the islands. Quite a few fish were in the 50cm+ range with most in the 40-50 cm range. Agreat trip was had by all and will look forward to next year and tackle it again. 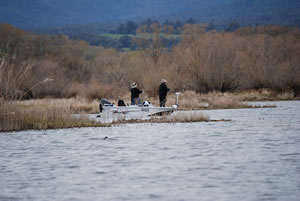 15 members of GDAC headed to King Ash Bay near Borroloola NT 1000km from Darwin chasing Barra and anything else that we could catch. Following are some photos of our trip and some of the great fish which we caught.

It has been a while since our last report with many of our members fishing all over Victoria, northern NSW and even Tasmania

Currently the reports have been good at Mallacoota for large flathead on the outside reefs and some good bream inside.

Bemm river has fished well with bream to 39cm in swan lake and good perch up the river on live prawn. The salmon to 3 lb are going well on the surf with the gutter in very close

WesternPort has been going well on the whiting out from Rhyll as well as alot of Elephant fish showing up.

Port Phillip bay has been good for whiting off Werribee, Rye, and Portsea.

Members had a trip to Lake Mulwala on the border of Yarrawonga and Mulwala. We camped on the lake and had a great long weekend for Australia day. Following are some photos of the guys with some great fish